The CXR925 is a great two way radio for anyone who is looking for new camping gadgets or a good way of communicating when out on a hike. The units are very sturdy and they function extremely well, though they do bring along with them a few downsides. Some of the added functionality that come with the units add a little bit to them that puts the Cobra CXR925 a step above most of the other two way radios on the market. The ability to select the power output and transmission levels of the radio allows you to have more control over your battery life. The addition of an automatic digital voice recorder is another hallmark feature that sets this apart from some other units.

The only issues that arise with this radio is the range and the battery. Though the range is advertised as being 35 miles, the best thing that a person can reasonably expect to reach in terms of usable range is probably less that 35 miles. The battery has a long life, but it cannot be replaced with loose batteries in the field. This means that when the battery is done for the day, it is done. At least, that is, until you charge it. The issue with charging it is the fact that it fits very loosely in the base.

• Only accepts the included battery packs, not loose batteries.
• Difficult to open, possibly resulting in damage to the units.
• No included earpieces.
• Radios fit loosely in the charging base

The unit has a very good design in terms of both aesthetic quality and the usability. Since it is so easy to hold it avoids the problem of becoming a chore to use. The weight is also good, even with the battery pack inside.

The CXR925 is one of the higher end radios on the market for this purpose. As far as GMRS and FRS radios go, this is one of the only ones to use higher end batteries. It also has a very nice case. The case is made of black plastic, for the most part, and is very sturdy. It feels as though it can stand up to a lot of wear, though it is still lightweight enough to be comfortable if you attach it to your hip. Even with the attached batteries the radio is not too heavy. 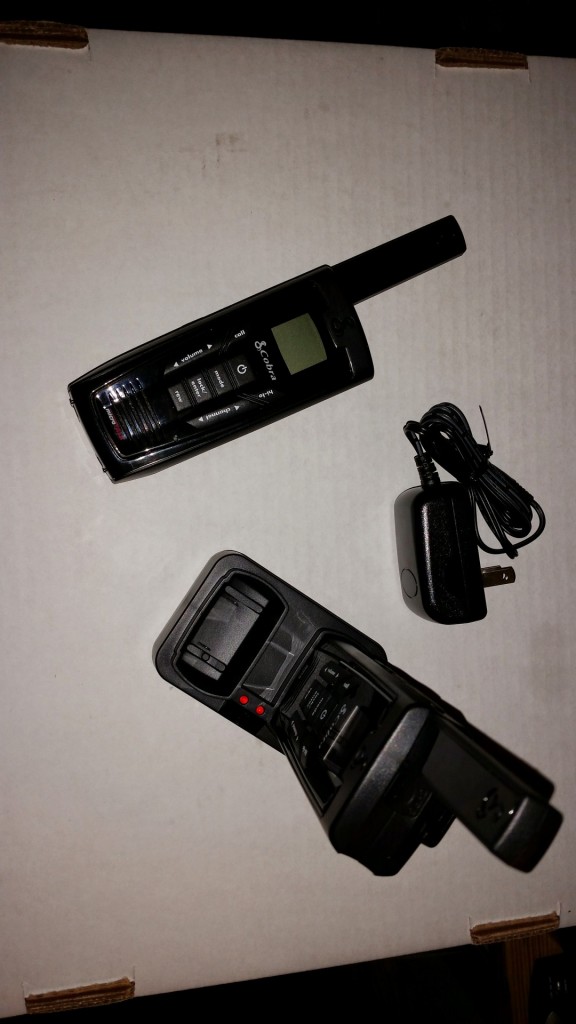 Most of the face of the unit is a thick plastic resin. The top of the face features a digital display that is about 1×1 inch in size. Below that are the buttons, comprised of a rubber material. The text is written in white on black and is clear and easy to read. The digital readout has a green backlight, though it is not too strong. It is plenty strong enough to read in low light conditions, however, and it can be turned on and off via a button on the side of the radio itself.

The sides of the unit are sleek and comprised of hard plastic like the rest of the case. Only the left side is adorned with anything. The left hand side has the transmit button (in a very convenient location) and the lighting button that toggles the backlight for the digital readout. On the back of the unit is the belt clip and the battery cover. The cover itself is only held on by the belt clip and a small clip on the very bottom of the unit which clicks in place to hold the cover in.

The electronics inside of the radio are high quality as well. The batteries are lithium-ion, a step above the LiMH batteries which have become industry standard in recent years. They last longer, hold a better charge, and allow for higher power transmission throughout the unit. A digital voice recorder is included on these radios as well, allowing for 20 seconds of automatic voice recording. Automatic squelch filters out weak transmissions and white noise. All of these additional electronics sit on top of the backbone that already exists which allows for 22 channel talk over GMRS or FRS wavelengths.

Belt clips that come hard attached to the back of the radios work great. They do not expand quite as much as much as one would expect. With that being said, they are extremely sturdy and work very well. A lot of clips seem to be flimsy or feel like they will easily break. That is not the case here.

The CXR925 two way radio has a great look. It is black hard plastic with a plastic resin face. One of the most striking things about the look of the radio is that it is very tall and slim. It fits very easily into the palm of the hand and does not have issues with weight like many other similarly priced radios do. The display is clear and the readability is high. A green backlight is available for low light conditions. Buttons on the unit are black in color and feature very clear and readable text in white font. All-in-all this gives the radios a very neat and feature rich design.

Another thing to note, unlike many other two way radio units, is the fact that this Cobra microTalk radio has a slim and non-bulky charging base. It will fit easily in a corner and does not take up too much space. That is a breath of fresh air in an industry that seems to believe that a charging base requires a solid square foot of space to be functional. This might not seem like a big deal, but it means a lot, especially in areas where space is a large concern.

Getting the radios set up to use is very easy. With that being said, there needs to be something said about the packaging itself. Like many radios at this price point, they come in a blister pack comprised of a thin plastic sheet which bubbles around the items and is surrounded and held together by cardboard. If you are the type of person who likes to open things cleanly and without much trouble, you are going to hate this packaging. It is right next to impossible to get the actual package opening. This could potentially lead to you damaging the product while trying to pry it open with a tool (there is not a chance you can do it without a knife or some other tool).

The CXR925 is very comfortable to hold. Clearly, this bears mentioning because it puts it a step above a lot of other radios available at the same price point. While a lot of radios out there are heavy or bulky and somewhat uncomfortable to hold, this one is slim and tall. It does not weigh too much. The radios fit right into your hand and are the perfect shape for use. Buttons are conveniently located as well, which is another design choice which benefits the CXR925 as a whole. Having sturdy hardware and an attached belt clip only add to the usefulness of the radio.

The buttons on the unit are very easy to use and, for once, they are clearly labelled. Rather than using some sort of hard plastic or a single piece of rubber, all of the buttons are able to be used individually. They are easy to press, function properly, and are very clearly labelled. Clear labels are something which is sorely lacking in the industry. With these radios you can pretty much use them right out of the box without having to fight with an instruction manual to figure them out.

Though the radio does not feature any rubber feet on the bottom it still stands up very easily because of two hard plastic pieces on the base of the radio. This is something which was somewhat unexpected. Usually, without the presence of some sort of soft rubber feet, things will simply slide around or fall over when set up. It was a pleasant surprise to find out that this was not the case with these radios. Again, this is a breath of fresh air and shows that Cobra actually spent time on the design of their radio.

A major issue with the unit is the battery situation. Though the batteries do last a very long time, you cannot replace them in the field with loose batteries like you can with most two way radios. With that being said, the batteries that come with these radios are lithium-ion rather than the more common Li-MH batteries. In terms of charge, lithium-ion batteries hold a charge for much longer than their counterpart. This does work in the favor of the CXR925. The radios will last over 12 hours in the field, even during times of heavy use. With that being said, the batteries will run down relatively quickly if you keep the unit transmitting on some of the higher settings that are available.

The range on the Cobra microTalk radio is about 6 miles at best. Though the advertising states that it will function up to 35 miles, that is simply a pipe dream. Once you hit about the 6 mile mark, even on the highest power settings available, the signal is going to cut out. This is nothing new for two way radios, however, so it is not something which should be held against Cobra in this case either. The signal, when it is close enough to be used, is extremely crisp and clear. The volume works wonderfully and, in case you are in a situation in which you cannot have loud volume, the radio also features a silent mode utilizing a vibration feature.

These Two way radios are great for the price point. The addition of functions which are not even needed is only a bonus to the already-great service that a person can get out of these units. Having an included digital voice recorder and a vibrate function are great for times when you might miss a message. Though the range is not what one would expect, this is not a huge issue. The range is greatly exaggerated on all two-way radios, so it is not a problem here. The only real issue with this radio is the fact that it will only function with the battery packs included with the unit itself and not with loose batteries.

Though the range is not as far as the advertising makes it seem, that is never the case with these types of radios. The range is one of the best on the market in terms of bubble-pack two way radios. It reaches about 6 miles, which is around 2 miles farther than most other radios on the market at the same price point.

If you are planning on going hiking anytime soon and you are looking for a cool camping gadget to take along with you, try the Cobra microTalk CXR925. It works very well for what it is. There are other units on the market with a better range, but in terms of usability and functionality, the CXR925 is tough to beat. This is the highest end of the Cobra GMRS/FRS radios, so it carries a higher price than the 825 or the 725, but the additional functionality certainly makes up for the price.