The Eton FRX3 is a hand turbine AM/FM/weather alert radio with a slew of other functions that may come in handy during a time of emergency or during your camping trips.It sports a number of functions which make it useful for what it is, including a smart phone charger (via USB), a hand turbine for charging an internal (but removable) Ni-MH battery unit, a functional radio, and a flashlight. There is also a notification and alarm function featured on the unit. The top of the unit has a solar charging panel meant to assist with battery charging. 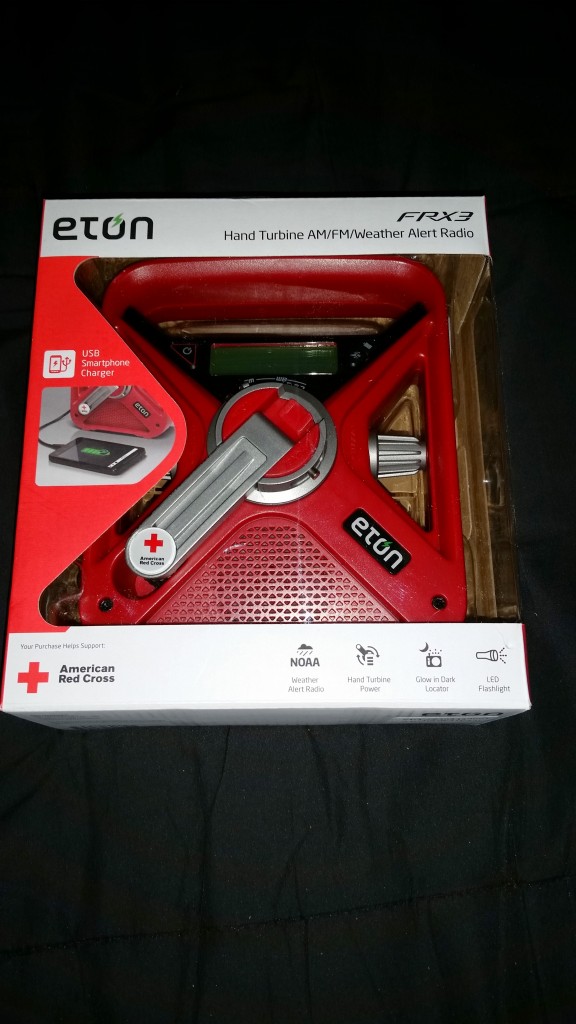 Pros
• The unit is sturdy.
• The unit functions as advertised.
• Radio station is able to pick up most local stations, including weather advisories.
• Unit has the ability to charge smartphones, provided you have a cable to do so.
• Unit comes with a mini-USB to assist with charging and a wrist cable which attaches to the top.

• Battery meter is confusing at times.
• The Ni-MH battery which comes included wears down faster than advertised.
• The design of the unit is inefficient, which makes it difficult to use at times.
• Even at full charge the flashlight on the unit is dim.
• User manual lacks clear instructions.
• Somewhat flimsy hand crank.

The unit, though fully functional, could use some improvements. The radio quality is less than stellar, but it can be overlooked due to the purpose of its usage. The flashlight is a bit too dim to be of much use in an emergency situation. The design is somewhat lacking in functionality as well, but it is not too difficult to use.

The unit itself is made out of thick, heavy duty plastic. The case itself has a strange design quality which plays a negative role in the functionality of the unit. The hand crank on the front meant to help with charging the battery feels flimsy and seems as though it could break off very easily, even with simply using it too vigorously. It does have a small station in which it can sit when not being used, but it would be more useful if there were a way to remove the crank when it is not being used, to prevent accidental damage. A relatively long antenna folds up into the back of the unit to assist with the radio. 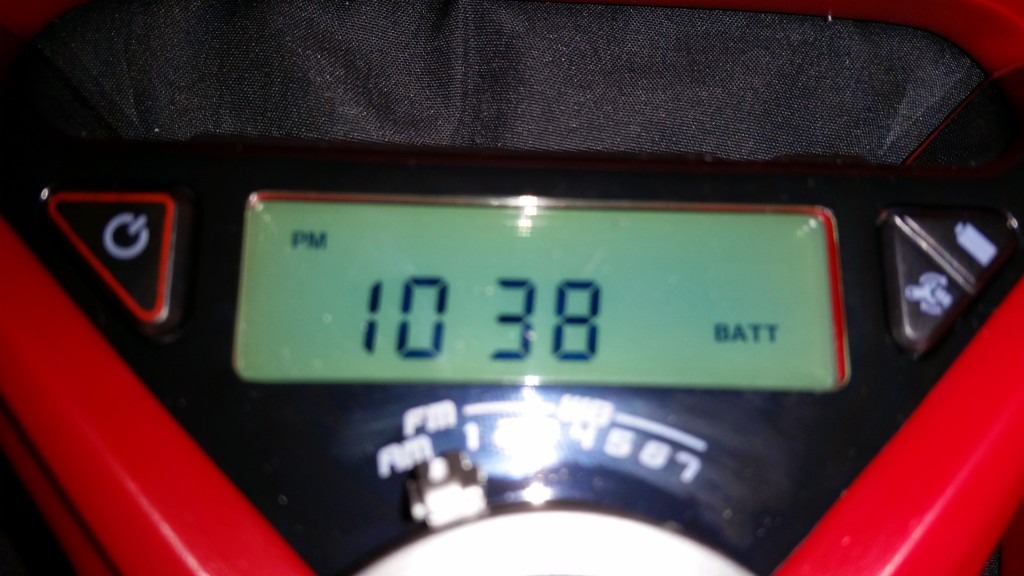 The hard plastic case of the unit is red in color, with a matter silver adorning the radio knobs on either side and on the hand crank in the middle. The buttons of the unit are a mixture of hard plastic and a thick rubberized material. The looks of this unit are somewhat off-putting. Though at first glance it looks to be very sleek and efficient, when put into practice it turns out that it is anything but. The unit is square in shape with hand holds on three of the four sides. The top of the unit has a solar panel which is meant to help charge the battery.

The actual design has a professional look about it. It is almost industrial looking. The issue is that it lacks a certain level of functionality due to those looks. The only legitimate spot to hold the unit is the very top, where holding it would block the solar panel from charging the battery. The two side holds are not as easy to utilize due to the fact that the volume and tuning knobs jut out into the middle of the place your hand would go. This disturbs the functionality both because it makes tuning and using the volume more difficult and because it prevents the hand from holding the unit on either side properly. 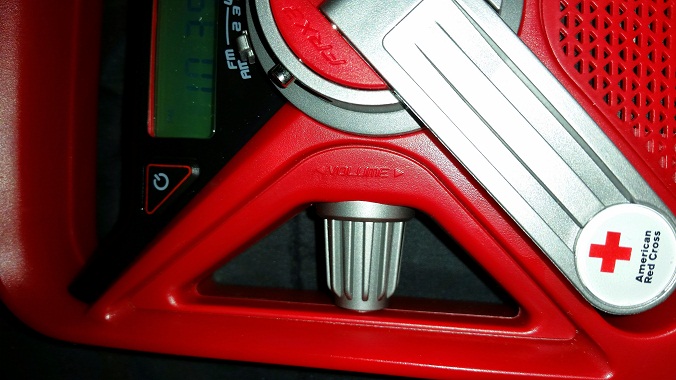 One nice feature that was included are two rubber feet on the bottom of the unit. Since the unit is meant to operate sitting upright, this is extremely useful should you set it on a table or other surface. The feet prevent the unit from slipping or moving back and forth too easily and help to protect it from any potential damage which could occur as a result.

The unit is able to charge cell phones via a dump-charge from the batteries on the unit itself. I found this to be extremely useful. If I was in an emergency, I could see myself using this unit for that purpose. The only issue I have is that there is no information provided about the amount of charge being sent from the unit to the cell phone. Batteries, particularly on phones and tablets, are very sensitive to the amount of current that they are receiving. With no information being provided about the amperage of the dumb charge I was a bit concerned that I might cause damage to my phone by charging it this way.

The hand crank on the front of the unit can be somewhat protected from damage that might occur through the use of a small alcove on the unit itself. The knob of the hand crank can be placed into that alcove and locks in, to a point, which helps the crank stay in place. Without the inclusion of the alcove, the knob would simply be jutting out of the front of the unit at all times.

The unit is functional in practice. Everything works as advertised, with the caveat that none of it works particularly well. The flashlight, even on a full charge, has a relatively dull and understated brightness. There is another interesting feature included with the flashlight as well. Should you press the on/off button for the flashlight once when the flashlight is on (presumably to turn it off) it will, instead, turn the flashlight off and turn on a blinking red LED on the bottom of the flashlight. I was not able to determine what this light was meant to be for and the instruction manual made no mention of it. Presumably this is meant to operate as some sort of emergency beacon. This is a good inclusion, but I would have preferred a bit of an explanation regarding its inclusion and usage. As is, I am just left guessing what the purpose is for. Interestingly enough, this red LED is brighter than the LED bulbs used for the actual flashlight. 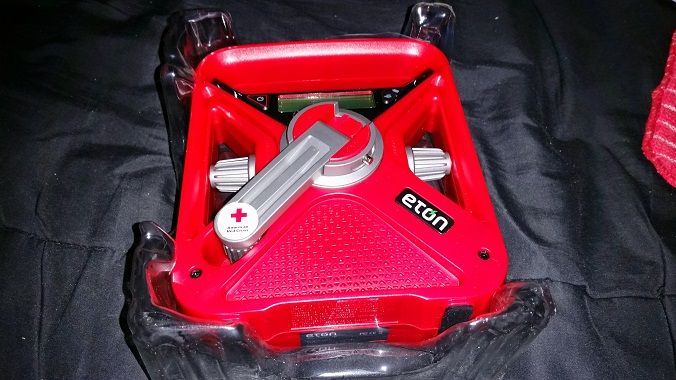 One confusing aspect is that there are two buttons on the front for battery. One will display the word “BATT” on the screen and will present a small battery meter for you to read the power left on the unit. The other displays the word “DYN” (for “dynamo”) and displays a meter as well. The issue is that “DYN” actually refers to the Ni-MH battery which comes with the unit and displays the power for that and “BATT” displays the battery power for any batteries you install in the unit. This is very confusing, at first glance, and more than once I believed that the Ni-MH battery was dead because I was misreading the display. 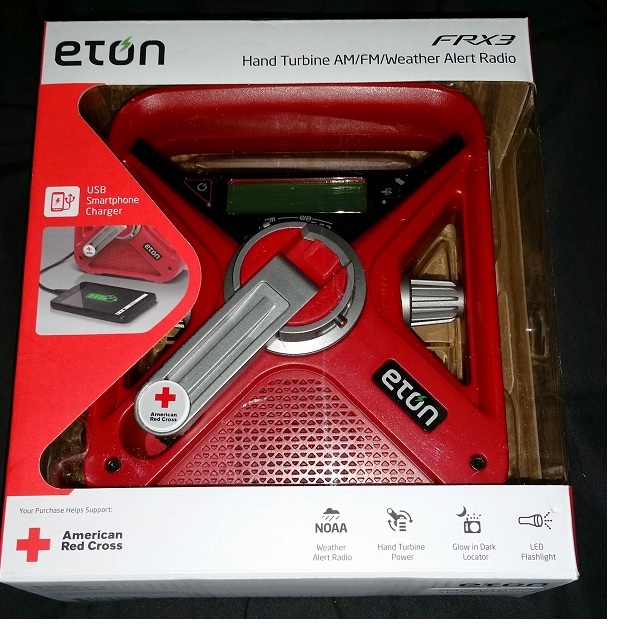 The radio is an issue as well. Though it does pick up many radio stations, it does not pick them up very clearly, even with the antenna fully extended. This is not a huge problem, because the NOAA weather stations come in clearly and most radio stations are still able to be heard, even from the inside of the home. To be fair, I was able to hear a variety of local FM and AM stations and I was also able to pick up the local weather station information. These stations often had static, however, even with the antenna extended. I was not able to pick up all of the stations that a small handheld radio I own is able to pick up, though they both have similar sized antennas.

Battery life is a whole other issue, unfortunately. The time that the user manual lists for battery life is great exaggerated, however. The solar panel indicates that it takes about ten hours to fully charge the battery in direct sunlight. The hand crank does charge the unit and allows the unit (including the radio) to be used during cranking, but there is no time provided in the documentation for how long the unit takes to charge in this manner. I used the hand crank for about ten minutes straight and couldn’t even get a third of the battery charged. This is both good and bad. You might not have the time or energy to store up a significant charge in this way, but the unit will be functional while you are doing it. So if worse came to worse, you would still be able to use the unit, just not without cranking it.

Since the unit is meant to be used inside (it is not waterproof and the manual says to keep it out of direct sunlight), it is somewhat difficult to understand some of the design choices that were made here. Why have a solar charging panel at all? The panel does not work in a window or via any sunlight coming in from outside and the unit will be damaged if you leave it outside to charge. The shape of the unit is not conducive to charging it via hand cranking either. It is not difficult to do so, but it is much more awkward than it needs to be. There is simply no good way to hold the unit while using the crank itself which makes hand cranking a lot more of a chore than it otherwise would be.

In an emergency situation or if the power was out, the Eton FRX3 would be a useful item to have around. It functions basically as it was meant to. The radio remains functional indoors or outdoors. The flashlight is entirely functional as well, if a bit dim. During an emergency, it would certainly be a benefit to have all of these items on one single unit rather than having to scour around the house or garage to find each individual item (a radio, batteries, a flashlight, etc).
The problems with the unit are not too much to be overcome by its functionality, but they do leave a bit to be desired.

One somewhat confusing fact is that the unit is primarily meant for emergency situations but it seems as though it cannot be used during those times as it was devised. For instance: It is not meant to be used in humid areas and it will cease to function if wet. When the power is out where I live (the time the unit would be most functional) it gets very humid. Since it would get humid the unit would not be able to be used. That is a significant downside to me. The charging time for the battery using the solar panel is also an issue which concerns me. 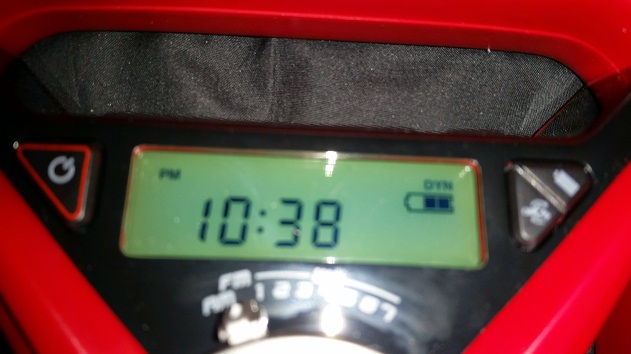 There are better camping gadgets on the market which do the same things as the Eton FRX3. In fact, you could probably pick up every single component that this unit includes at a price equaling less than the cost of this unit itself. Though it does operate in the method that it was intended to, a lot of the functionality is impaired by poor design and lackluster performance. In a pinch, it would work, but better units are available at the same price point which might be worth a look. Personally, the design issues make this unit less than stellar. It is just too uncomfortable to use sometimes for it to be worth a serious look. That issue comes into play particularly with the hand crank on the front. Is it functional? Yes. But the design offsets that functionality. 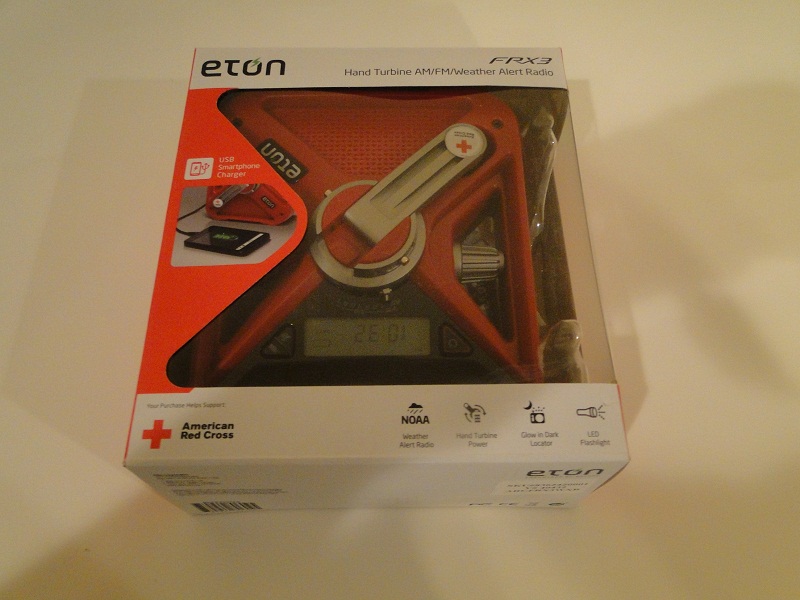 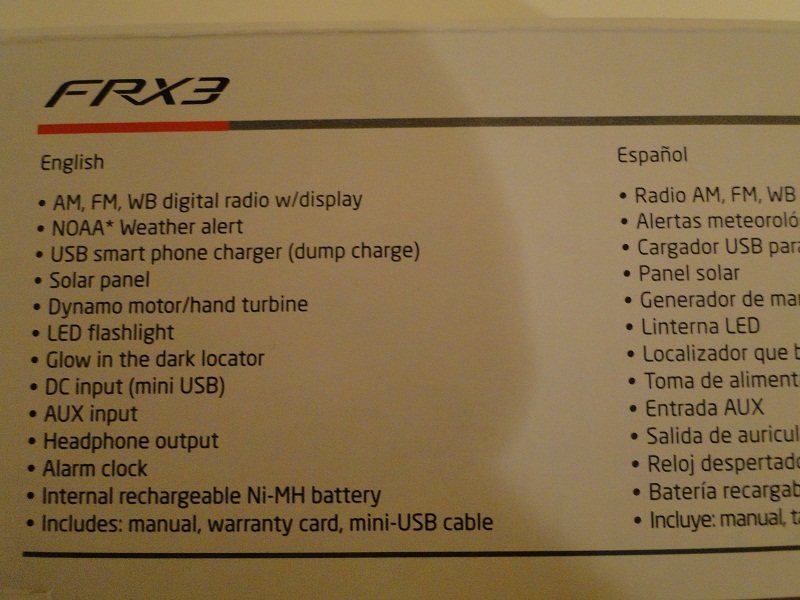