The Joos Orange solar charger is an interesting piece of gear. It is a solar panel that is built and designed for the camping and survival crowd. It’s small, lightweight, and portable. 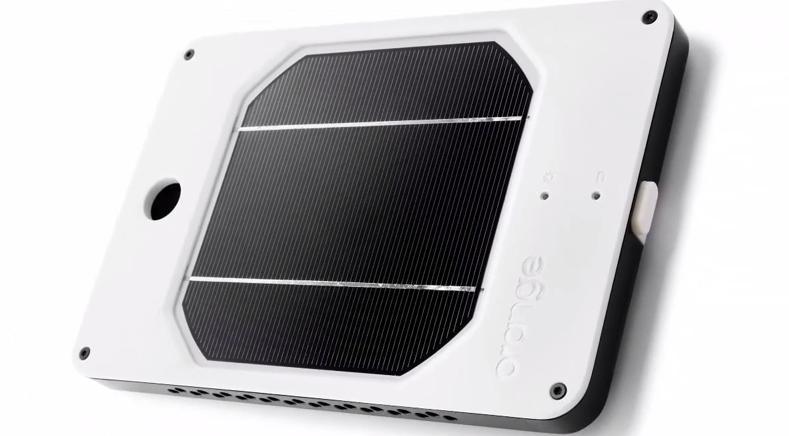 The Joos has an odd name, but is an awesome piece of gear. If you’ve ever experienced using a solar panel charging device you may have been a bit disappointed in it’s performance. Many times these solar charges can take more than a days worth of sunlight to charge something like an IPod.

These Solar Panels are quite small and try to offer the user a sense of being compact and ease of carry. The problem here is that these small panels absorb very little sunlight and have very small batteries. Most of these solar panels are cheap and tend to break when exposed to any kind of harsh conditions as well. So when designing the Joos Orange the efficiency of the panel and it’s resistance to the elements. The larger the panel the more efficient the device collects sunlight.

The Joos Orange is small, but it’s too big to put in your pocket. The Joos Orange is roughly the same size as your typical tablet but is a bit heavier. The weight is due to it’s inherent damage and element resistance, as well as it’s own internal battery. The Joos is perfect for a camping and survival situation since it can be thrown in a pack and be rattle around without risking damage.

The most important feature in one of these Solar powered charges is it’s ability to charge your gear. The Joos Orange charges items via a USB cord and the following device adapter tips: Micro USB, mini USB, standard female USB, and connectors for LG, Iphones/Ipads, and Samsung devices. Outside of smart phones, tablets, and cameras numerous pieces of outdoor equipment has evolved to use USB ports as a charging method. This includes GPS systems, flashlights, and lanterns. So the Joos isn’t just convenient to charge recreational gear. 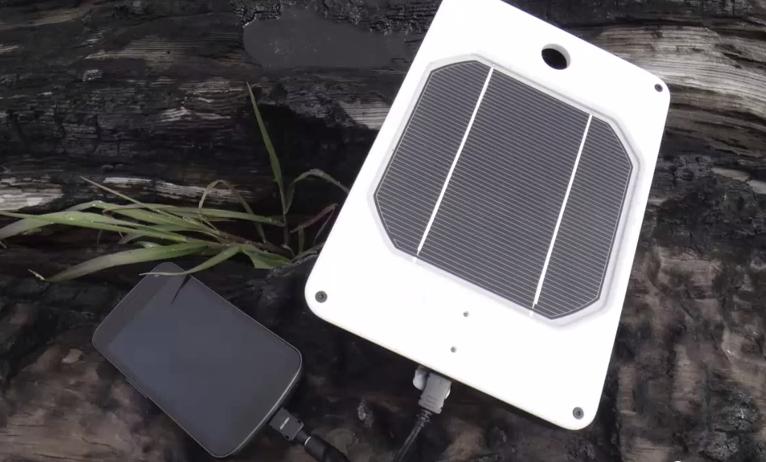 A fully charged Joos can charge a smartphone about two and a half times, and a get close to fully charging an Ipad. The battery is 5400 mAH, which is a generous size and is capable of holding quite a bit of energy. 12 hours collecting sun will deliver 8 hours of charge time. This is done by using the most efficient commercially available monocrystalline solar cells, coated with an antireflective coating. The battery is removable and replaceable, and this is a major advantage. Having multiple batteries means you can keep multiple batteries charged and keep them stored for a rainy day or a long night. The Joos can use optional reflectors to improve the power production by 50 percent as well.

The Joos Orange has a microprocessor that controls battery charge, LED alerts, and battery charge monitoring. The electronics are urethane potted, which if you are not familiar in the process it waterproofs electronics, and makes them resistant to moisture and humidity.

Before going into the great outdoors you can choose to charge the battery by connecting it to a variety of different power sources. The Joos can be charged with a USB adapter from a computer or wall adapter, and can be charged by a 12 volt cigarette lighter. This makes the Joos Orange a handy piece of gear to keep in your car in case of emergencies where you need to charge a phone, gps, or flashlight.

The Joos Orange is an excellent device for the hard core camper or prepper. The device is far from fragile and is both internally and externally as hard tough as nails. Another market for the Joos Orange is the military. Marines and soldier deployed overseas have a variety of small electronics for movies, music, and taking pictures. In remote firebases and patrol bases there is no power, no way to charge these items. A charger like this would be perfect to keep in the pack for remote power.

The strength of the Joos makes it tough and superbly reliable. The Joos Orange is reinforced with a variety of features to increase it’s lifespan and reliability. Camping can be rough on anything and the first thing new campers learn is your trip is only as good as your gear. Your gear has to be tough and reliable.

The Joos has a molded case, built from polycarbonate materials, and is injection molded. Setting a charger in the sun and asking to collect power is going to generate heat. Heat can kill electronics as fast as water can. The Joos devices uses metal heat sink to reduce heat, as well as a ventilation that reduces heat and enhances performance.
The Joos Orange is also waterproof and submersible. While I wouldn’t leave it in the rain, it can withstand it. The Joos also has a security cable hole so if the device is left unattended at a campsite it can be secured. 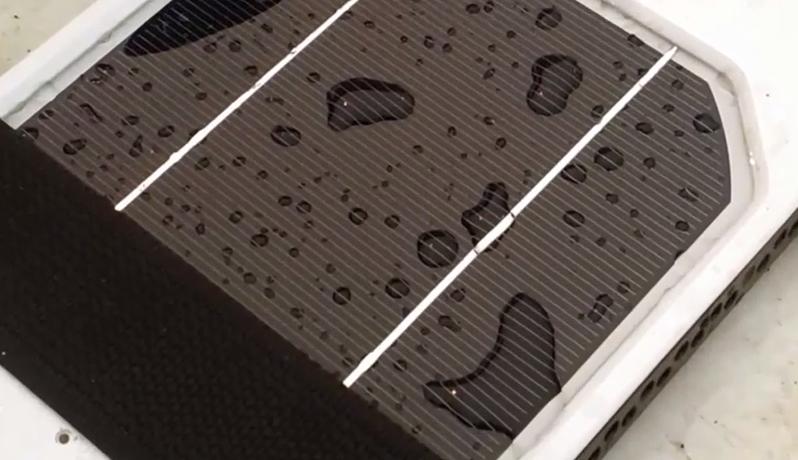 The Joos Orange Solar Charger in the water

Now these features come at a small cost. The Joos does weigh a bit more than your average charger panel combination. The Joos comes in at about a pound and a half, of course it weighs more if the optional reflectors are added. A pound and half isn’t too bad when you consider the performance you get from the device. Pound equals pain, but performance is worth a bit of pain. The added confidence that the charger won’t fry if it gets a little wet, or brake if a pack is dropped a bit too hard makes the weight worth it.

The Joos Orange solar charger is pretty easy to use and capable of being deployed anywhere. Due to the design inherent toughness I never felt the need to wear kid gloves with it the device or babysit during use. One of the handiest features is the fact the Joos has a set of movable legs that allow the Joos to be positioned directly in the sun to maximize the charge it can gather.

The Joos Orange also handled cloudy and overcast days extremely well. Better than any competitor’s. The multi positional legs meant the only thing I had to do was to keep the panel pointed towards the sun. The Joos Orange charged nice and stayed cool throughout the charging as well.

The Joos is insanely user friendly and even features an app to improve the usability. This allows you to monitor how the batteries contents, how much solar power the battery is being generated.
The JOOS app generates a dashboard for easy reading.

The Joos has a red led for when the battery is completely charged and can then be placed away. I did learn that if you leave one of the charging cords plugged in when you’re not using the battery it will slowly drain. This is actually covered in the user’s manual, and I just missed it. My Samsung smartphone charged twice fully, and about 80 percent the third time.

The Joos also charged my flashlight over and over, and since the light required only a little charge I have no idea how many times I could charge the flashlight from the battery before I run it dead. The same goes for my wrist mounted Garmin GPS. It take such a small charge and lasts forever so I couldn’t drain the battery with it.

The Joos is by far the best experience I have had with any solar powered charger and it is truly a beast in terms of durability. One will be staying in my bug out bag from here on out, and will finds it way on camping and hunting trips for sure.

What if My Device is not supported?
Joos Orange sells a variety of different chargers on their website www.solarjoos.com

Where do I get the monitoring app for my JOOS?
The app is free to download at www.solarjoos.com

How Long will the Joos Orange Carry hold the charge when not in use?
The JOOS will hold close to 70% of it’s battery charge for 12 months and 25% after 2 years without being charged.

If my phone and my JOOS is dead can I use my phone as it and the JOOS charge?
Yes, but it’s going to take about ten minutes for the JOOS to charge and the phone to charge.

Can I charge my laptop on the Joos?
Unfortunately not yet. Joos is working on this addition next and plans to release it very soon.
How Long does it take for the JOOS to become fully charged?
This depends on a few factors like the temperature, time of year, overcast conditions, and angle of the sun in relation to the panel. If the owner follows the sun, the JOOS can charge at a rate of 10 percent an hour. Using the positionable legs the JOOS can face any direction necessary.

What kind of Maintenance does the JOOS requires?
The JOOS is made to be extremely durable and requires very little maintenance. The only real maintenance is too keep the panel clean to guarantee the quickest charge.

Will rain damage the JOOS?
The Joos is built like a tank, and capable of resisting both rain and being completely submerged.

Can I swap the batteries?
Yes, and it’s quite easy to do. See the instruction on the Joose website.

Without access to the APP how do I tell how full the battery is?
The LED lights on your JOOS are a built in and simple system of blinks to let the user know the batteries charge level, The system works like this, The Red LED lets you know when solar power is being stored, and the green LED is to give you an idea of how full the battery is.

The LED lights will not blink when the JOOS battery is full and the unit is in the Sun
What are the Temperature and Humidity ranges?

The JOOS can operate at a wide variety of different temperatures and humidity isn’t an issue. This chart displays any and all restrictions.

Can the JOOS charge when there is no sun?

Yes it can. The JOOS can be charged via USB cable through a computer or other USB power source.

My Ipad/Iphone is not charging ?

Your Ipad and Iphone will only charge with the we provide. A standard female USB adapter will not work with the JOOS.

My JOOS battery is dead and I haven’t used it?

I mentioned this earlier in the article. That little black charging cable will slowly drain the battery without a device attached. This can be a major setback if the user does not pay attention.

How to Use the JOOS?

Setting up your JOOS for the first time is remarkably simple. Here’s what you do, open the box, remove the JOOS orange and set it up in the sun. That’s about it. To make the JOOS more efficient you should position the JOOS using the adjustable legs. If you have to place the JOOS in a stationary position, point it towards the south and it will receive the most potential sunlight. As soon as the red light starts blinking you are storing energy.