The Motorola Talkabout MS355R is a waterproof two way radio system which is meant to provide a reliable method of communication during field excursions or in the case of an emergency. Through a number of improvements over similar radio models, Motorola has put the MS355R in a position of being one of the most reliable two way radio unit on the market. The design itself is extremely sturdy and the internal electronics provide plenty of power for turning the volume up and down. Communications are crisp, clear, and easy to understand. Included with the unit are the charging adapter, belt clips, batteries, and earpieces. 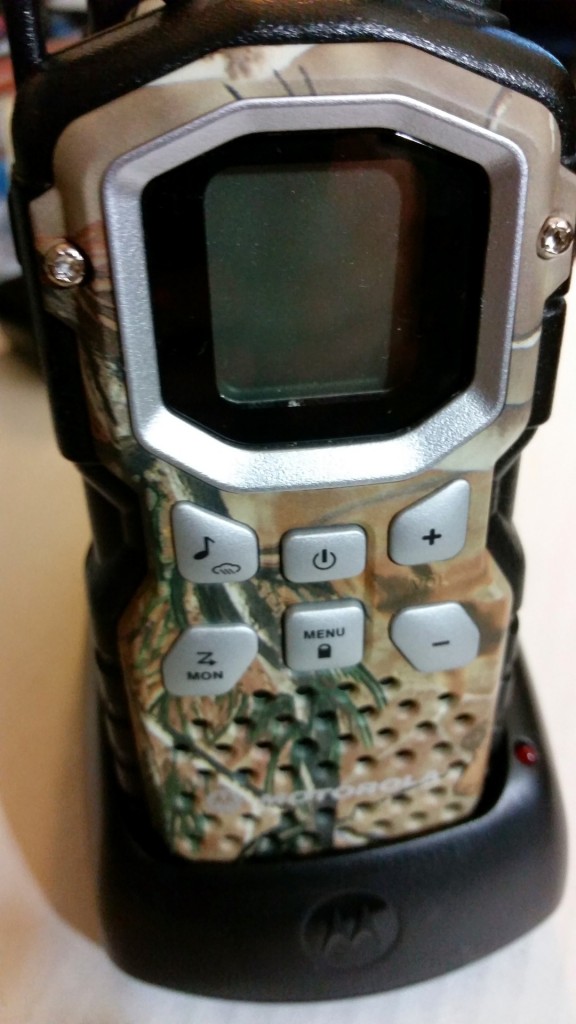 Pros
• Very sturdy design.
• Plenty of volume on the speaker.
• Includes charging adapter, rechargeable batteries, etc.
• Waterproof.
• Decent range (though not as far as advertised).
• Bright LED light on the bottom for use as a flashlight.

• Belt clips are extremely flimsy.
• Range is not anywhere near advertised.
• Some of the sounds cannot be turned off or have their volume lowered.
• Lack of available colors.
• Confusing display.

The case of the two way radio is extremely sturdy. It is made of thick, hard plastic. The face of the unit has a camouflage pattern emblazoned into the plastic of the casing. The face also has a small digital readout with black text on a bright red background (backlit by a red LED). The face also has hard rubber buttons, silver in color. The top of the unit has a small plastic belt clip on the left hand side and a hard rubberized antenna. The antenna is thick and seems like it would stand up to a beating. The back of the radio is comprised of the same hard and black plastic. A hole near the top allows for the attachment of a belt clip, which is included with the unit. Below that is the battery case, affixed via a hinge and a single screw to the radio. The left side of the unit has the low and high push to talk buttons and the right side of the unit has the headphone jack for the earpiece. 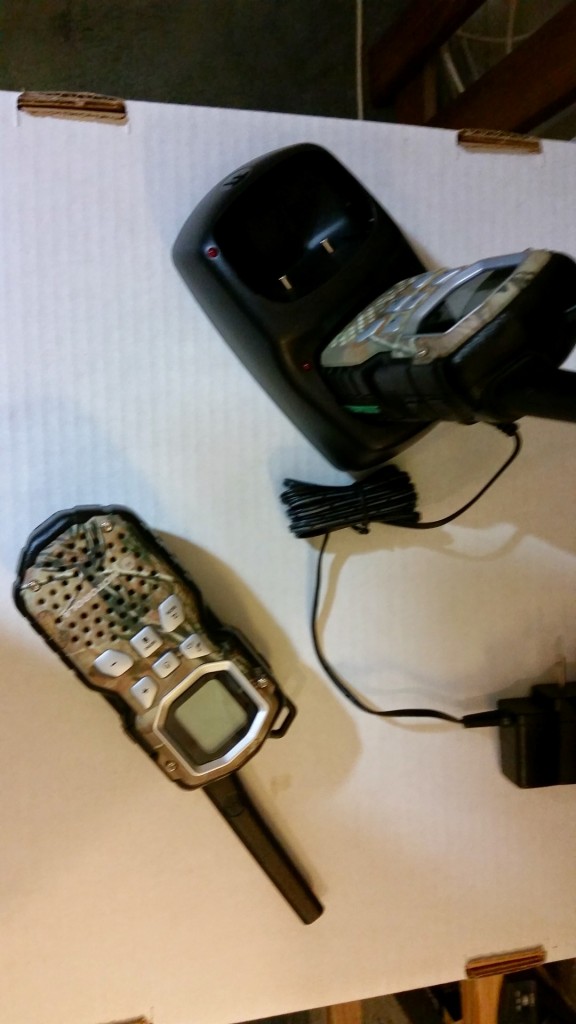 The internals of the unit are impressive. Though there is not much information floating around about exactly what is inside the unit, they work very well. The radio is powered by either three AAA batteries or through the use of a rechargeable NiMH battery pack. The unit has functionality to act as a repeater if you have the proper FCC licensure for that capability. The radio also works on both FRS and GMRS frequencies, so you will not have an issue with regard to communication through a variety of situations.

Batteries and charging station are both included. There is not much to say on this front. The batteries and the charging station are both sturdy and seem to be of high quality make. The charging station is small and places the units right in front of each other. When the units are charging, two bright LED lights are lit up beside the radios, one for each one that is charging.
Also included with the unit are two earpieces which work very well and plug into the right hand side of the unit into a headphone jack. The unit also comes with two clips which can be used to attach it to the belt of anyone who is carrying the unit around.

Comfort level is high. The unit is a bit heavy, but it has a good and ergonomic design that feels right in the hand. The waterproof case is also a nice touch, and it has been stated that the unit will float if it is dropped in water which will make it much easier to spot when it is lost.

The case is shaped somewhat like an hourglass and it is easy to grip. Though it is made of hard plastic, it still looks good. The front has a camouflage design and the rest of the unit is made up of hard black plastic. Buttons on the sides are black as well. The buttons on the face of the unit are silver in color.

One potential complaint about the look of the unit might be that the only color the case comes in is camouflage. While this is probably useful for hunters or out in the wilderness, it is also a burden at times. Since the unit is so dark to begin with and has camouflage on the front, it would be nearly impossible to find if it got lost in the woods. The only distinguishing feature being the metal screws on the face of the unit and the back lit display. It would have been nice to have had an option for either a bright or a neon color for the case so that it could be easily found if lost.

First things first: Opening packing for the unit is absolutely impossible without the use of a tool or an instrument. It is in a bubble-pack type of case with a cardboard sheet acting as the top and bottom (on which information is printed). Unfortunately, the plastic on the case itself is stuck in the middle of this cardboard sheet with no easy way to get it out. Using a knife, the cardboard was able to be separated down the middle and, after tearing up the outer packaging, the radios and accessories could be removed. Everything was fit snugly inside, the only issue being the packaging itself. 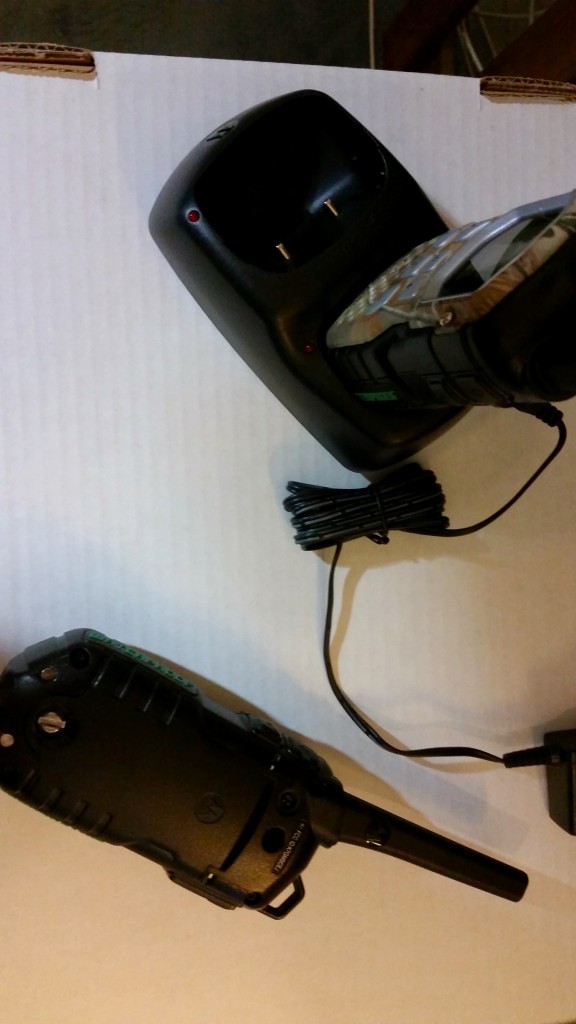 Putting together the unit was surprisingly easy. There is one additional step that most two way radios do not have, however. Taking the battery case off of the back of the unit requires either a flathead screwdriver or something else (like a coin) in order to remove a screw and lift it up. After that is done, assembly is extremely easy. Utilizing the unit for communication will require a bit of setup between the two radios that are included, but the documentation covers that extensively. It should be noted that is is a very good idea to do this prior to the time you need to actually use the radios, because the process is somewhat complex.

One complaint that could be issued against this unit is the lack of a flat space on the bottom to set it upright. If you do not want to set it on the charging station (and keep it on your desk instead), you will have to prop it up on the small square that makes up the battery. Laying it on its side anywhere besides a flat surface might also present a problem because the entire case of the unit is composed of hard plastic. This is wonderful in terms of keeping the radio free from damage, but since it has no rubberized feet or anything it is prone to sliding around a lot on surfaces.

The display is bright and is backlit by a bright red LED. There is an issue with this, however, because if the unit was designed to be used in the wilderness for hunting (as is implied by the camouflage case) then it doesn’t really make sense to have a bright and unnatural LED that goes off every time the unit is used. Nor does it particularly make sense to have such loud volume, even when it is turned down, which is something which will be discussed later in the review. All in all, the display is easy to read and it is bright in color. Understanding the display, however, is another story.

The display of MS355R walkie talkie has a lot of icons and there is really no easy way to distinguish any of them from each other without memorizing what they mean through the use of the documentation that is included with the unit. The channel selection on the display is obvious, but the rest of the display is pretty confusing. There is a battery bar on the top left of the display that is also easy to read. Beyond that, seriously study the documentation because it is anything but self-explanatory.

The ergonomics of the unit are pretty good. It’s easy to hold. It is also waterproof, which is wonderful when it is being used in rain (light or heavy). Dropping it in water, you will find out that it floats, so that is not an issue either. One issue with the unit is that it has no easy way to stand it up. No rubber feet on the bottom or back, nothing. You stand it up and it just falls over. Set it down on its back and it just slides around. The inclusion of rubber bits for this purpose would have been nice.

Range is definitely a concern with this radio. The advertised range is 36 miles. The best range you are ever likely to see if 5 miles. The average range you will get out of the unit is between 1.5 and 2 miles. This is not necessarily a bad thing, because the unit works great when it is in range, but it is something to keep in mind. The packaging on most radios greatly exaggerates the range, even under perfect conditions. Keep that in mind if you need a unit that is going to be able to transmit farther than 2 miles.

Volume is something which is a bit concerning as well. You will never have to worry about hearing these radios. When you turn them on they make a very loud beep and they do the same thing every time you do anything with them. The volume of the voices coming across the speakers are loud and clear, but one would think that you would not have to hear the loud ambient noises of the radio itself if the volume is turned down. This makes the unit somewhat frustrating to use in public or even out in the woods, simply because of how loud it is. You won’t be able to use it stealthily, even on low volume, if you need to.

Though Motorla MS355R  does have some issues which could be addressed, it is a very good unit overall. For the purpose, which is a field radio or an emergency radio unit, it has everything that you would expect. It is very sturdy and it has a good design and build. There is not much to complain about on that regard. The fact that it is both waterproof and can act as a repeater (if necessary) is extremely useful. These two features are typically not found on units in this price range, so it is a big bonus to the MS355R.

On a solid rating system, this Two way Radio would probably get a 4/5 stars. It is definitely above the average build of this same types of units which are currently on the market. With that being said, the $80 price tag that it brings should come with a slightly better range and, perhaps, the inclusion of small things like rubber feed to set it down. Either way, the unit is very good for what it is and it is a great choice if you are in the market for a two way radio of this type.