The Uniden GMR4040 Is a 40-mile, 22-channel FRS/GMRS radio that features flow in the dark buttons and a weather resistant frame. Generally, this is going to be a piece of camping gear that you would buy if you were planning to go hiking or camping. The bright buttons and the backlight for the digital display make this the perfect radio for people who plan to be working in dark areas or during the night. At a low price point of around $59, this two way radio is also a great choice for people looking for an inexpensive and cool camping gadget. 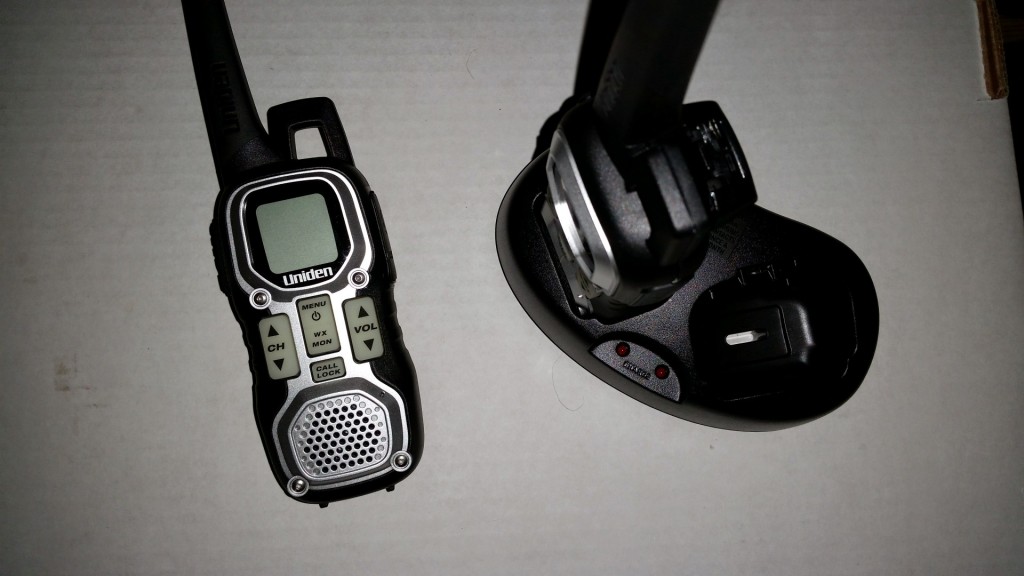 Pros
• Simple to use.
• Good and sturdy design.
• Bright backlight.
• Weather resistant.
• Loud and clear voice most of the time.
• Glow in the dark buttons.

• The most nightmarish packaging ever to be created.
• Volume modification does not affect the actual transmission volume very well.
• Lots of static during transmission and after ending transmission.
• Range is nothing close to advertised.
• Battery cover is very hard to use.
• Only takes the rechargeable battery pack

Though the range is not as great as some other radios that are in the same market space, this one works just fine for what it is. Once you get past the nightmarish packaging that it is put together with and get to the actual units, you will be in a good place. There is not much to do once you have it open, other than throwing the battery pack into it. The use of the radio is extremely easy, even if you choose to skip reading any of the documentation that is included with them. The inclusion of earpieces makes using these a breeze as well.

This is a great consumer two way radio for anyone looking for a cool camping gadget to use on their next trip. It does, however, have some problems which should be mentioned. The packaging is almost impossible to get into, even with a knife. This is probably an anti-theft measure, but spending ten minutes trying to open these radios proves to be extremely frustrating. Another issue us that the battery case is extremely difficult to get into. Since it has a non-removable belt clip sitting right on top of the battery cover, you have to find some way to move that prior to use. That is not as easy as it sounds. Expect to spend at least five minutes messing with it before getting anywhere. 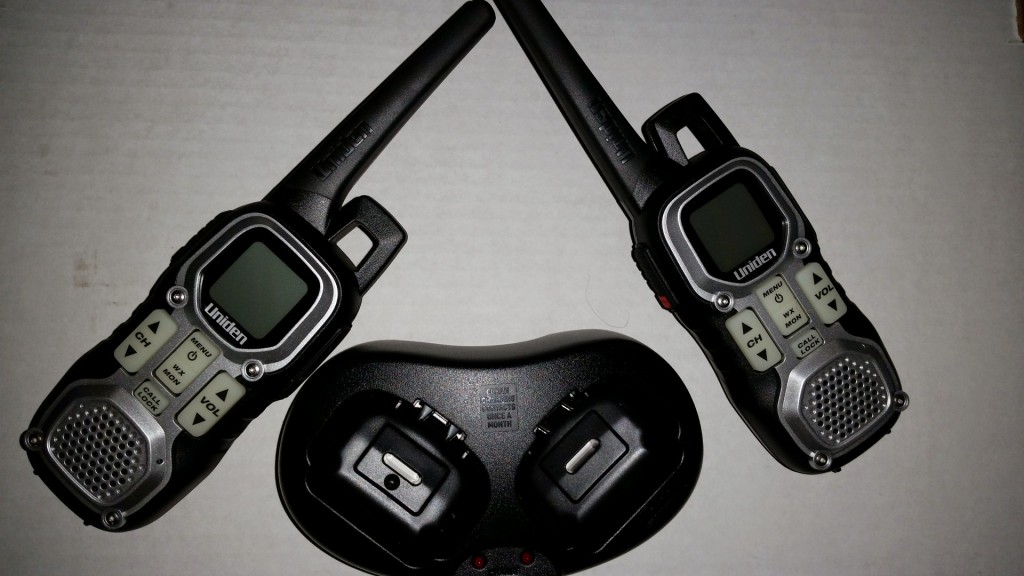 Overall, this is a good two radio in it’s class, despite any issues that it might have. It is definitely worth the purchase.

The hardware of this uniden radio, like most, is very sturdy. The outside shell is composed primarily of hard silver or black plastic. The top of the radio features a thick belt clip which can be used to attach a caribiner and a thick, non-removable, antenna. The back of the radio has a hard plastic belt clip attached and the cover for the battery case. The front of the unit has a silver face, the buttons, a speaker, and the digital readout containing channel and volume information.

The buttons are very well laid out and include glow in the dark functionality (which works very well). They all depress very easily and none of them have the problem that plagues many radios of this type: that pressing one button activates another. All-in-all, the hardware of this unit is top of the line. Some complaints can be made about the unit, but nothing too detrimental in terms of the hardware itself.

The belt clip and case can stand up to a lot of wear and won’t be damaged too much if you drop them, so that is another plus.

The look of this uniden radio is sleek. It fits very comfortably in the palm of the hand. The center of the sides of the unit are a bit concave, so you are able to get a better grip on the radio itself. It is not heavy, so holding it directly in your hand for a long period of time is a viable option. The face of the unit is comprised of silver plastic, the buttons of the unit itself, a speaker (on the bottom), and a digital display on the top portion. The very top of the unit features a non-detachable antenna and a hard plastic belt loop, both black in color. 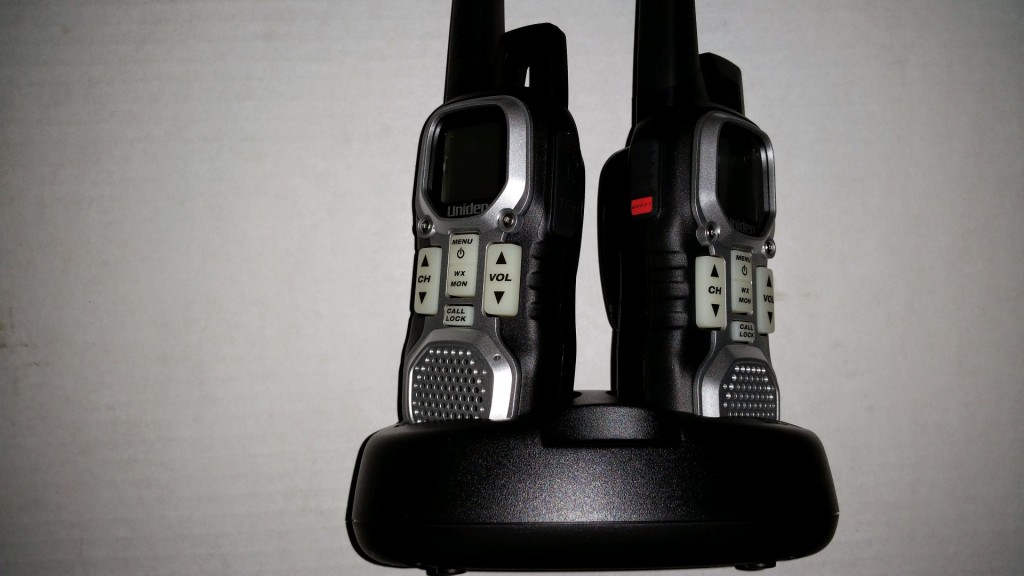 The buttons on the face of the unit are clear and easy to read. They have black text and markings on top of the buttons themselves, which glow in the dark. The left hand side of the unit features the transmission button. The right side features a mini-USB port and an audio jack. The bottom features two hard plastic feat. The back of the radio has a hard black plastic belt clip and the battery cover.

The glow in the dark buttons are a very nice touch, as many other units in the same field do not have that functionality. With regard to the digital display, it is clear and easy to read. The information displayed on it needs to be explained through the documentation, but that is not something which is unusual. The backlight for the digital display is bright orange and features black text.

The first place to start with this GMR404 radio is with the packaging. The packaging is the standard type of bubble package that comes with this type of two way radio. With that being said, the packaging is right next to impossible to open. It would be very easy to damage the radio or some of the accessories included just trying to get the package open. The two large pieces of cardboard backing are stuck together so tightly they require a knife to get apart. Even then, they do not separate properly. The hard plastic that encases the pieces of the unit is also glues to the cardboard, so even once you get the cardboard apart, you will still be stuck trying to get the plastic off. This can, and likely will, lead to injury either from using a knife to open it or from the very sharp pieces of hard plastic sheeting that must be torn through in order to get the radios out.

One issue that bears mentioning here as well is the fact that the only battery that can be used with this device is the rechargeable pack that comes with it. That means that if you run out of battery power in the field you won’t be able to replace it with loose batteries.If you carry a solar charger,it will solve the problem.

The programming and use of the radio is relatively simple. They will work right out of the box with nothing being done to them, but if you need to customize something you can do that very easily with the use of the documentation included. Even technophobes should be able to figure out the control of the unit intuitively without being told how to use them.

One possible complaint about this two way radio is that the volume of the transmission does not go down very much. Even when you put the radio volume down to 1 or 0 (the lowest settings), the sound of voices coming through is very loud. While it is good to have a loud and clear volume, there is definitely an issue with the fact that you can’t really turn it down if you need to. There is also a problem with static sometimes, but it is not a persistent issue and does not come up all of the time when the unit is actually in use. It can be frustrating when it does happen, though.

The buttons are easy to press and use and everything seems to be laid out comfortably. One possible complaint is that the audio jack for the earpieces is located on the right side of the unit near the top, right where you would be gripping it. It is distracting to hold and uncomfortable if the earpiece is plugged in, and it would have made a lot more sense, from a design perspective, to have included the audio jack on the top of the unit itself instead of on the side. This same layout is found on a lot of radios, so this issue is not unique.

The “40 mile range” is nowhere near what is actually being advertised. Though, as usual with two way radios, it never is. It will work in perfect conditions up to about 5 miles and then cut out (most of the time). In the city, expect to get between 0.5 and 1 mile of actual usable range. The range, of course, is never what it is advertised as being with these kinds of radios, so this should not be seen as a fault. A lot of things play a role in the distance the voice will travel, including weather, obstacles, or temperature. Even so, if you are after something with an extremely long range, this radio is not the one that you want to be looking at.

Another issue that bears mentioning is the fact that the backlight on the display will go off after 5 or 10 seconds. Normally, this would be good. It would work to conserve battery power and it would prevent excess light from being used. The problem is that there is no easy way to make the light come back on. Depressing the button to transmit does not turn the light on, so that option is removed. If it is dark and you need to see the display, you will not be able to read it without that light. The only way to get it to come back on, unfortunately, is to change the settings on the front of the unit. That is an issue which should have been address through the addition of a dedicated backlight button.

The long diatribe about the packaging might seem like nitpicking. It is not. Imagine a scenario in which you buy these units to use and then you wind up stuck in the lurch having to make a return because you damaged them getting them out of the package. In testing, not only did tools have to be used to get it apart, but people were injured by pieces of the hard plastic when trying to rip them apart. This is not something which should ruin the reputation of the unit itself, which is adequate, but it is definitely something which has to be mentioned in any good review.

This is a great receational two way radios for people looking for a camping gadget for their next camping trip or for their next hike. Though it does have some issues, it is well worth buying. The price point is great for what you are getting. Some of the extra functions that are included with the unit also add to the overall dependability and functionality that the unit brings along with it. It has plenty of channels, an adequate range, and the glow in the dark buttons really work to set this unit apart from some of the other ones on the market.